Founded in February 2006, and has been growing ever since. In August of 2010, The Vicariate for Palestinian & Jordanian Christian Orthodox Communities in America ordained Rev. Fr. Romanos Khoury to be the presiding priest of the Sacramento region. Since then, St. Stephen Orthodox Church has moved into a permanent location right in the center of the Sacramento area in Rancho Cordova. St. Stephen Orthodox Church is an open community accepting people of all nationalities who want to further their spiritual life and learn more about Orthodoxy. Our church hosts many events, and has services in both English and Arabic for all of the major religious holidays,

St. Stephen  follows the Julian Old Calendar in its liturgical celebrations. in which we welcome all of you to join us.

The process of implementation continued through 2008, when His All Holiness Ecumenical Patriarch Bartholomew and His Beatitude Patriarch Theophilos III of Jerusalem met at the Ecumenical Patriarchate and concluded final details, including the creation of the Vicariate for Palestinian/Jordanian Christian Orthodox Communities in the USA. Following the meeting at the Phanar, His Eminence Archbishop Demetrios of America was directed to proceed with the implementation of the agreements by the creation of a Vicariate for the clergy and communities within the Archdiocese of America. The clergy and communities of the Vicariate will be directly under the Archbishop of America and will report to the Archdiocese through the Archiepiscopal Vicar.

We welcome you to come and experience our rich and beautiful Divine Liturgy.

Hilarion the New; Herodion the Apostle of the 70; Stephen the Wonderworker

Visit the Online Chapel for more daily readings, hymns, a monthly calendar of saints and feasts, and more. 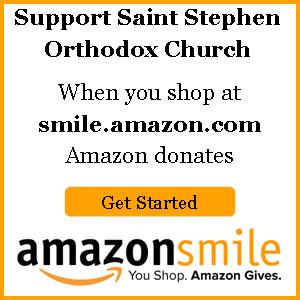